to $15/hour.  The veiled threat was if it was put on the fall ballot as an initiative by the unions, it would be more draconian.  The legislature decided it better take control and create the minimum wage but with a couple of exceptions–if the economy tanks, the graduated raises would be postponed.

We do need higher wages, but regulating higher wages is not the best way to achieve them.  This can make it even 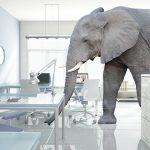 The Elephant in the Room

harder for businesses to compete.  A lack of competition in America is the elephant sitting in the middle of the living room and being ignored by everyone.  Over the last 20 years America has been concentrating its revenue into four major companies in each of her sectors.  They include IT, Media, Manufacturing, Transportation, Retail Trade, Finance and more.  Taking a look at the big picture, the same pattern occurs, has occurred or will occur in all segments.  For example, the airline industry is now controlled by four major airlines, American, United, Delta and Southwest and the health-care purchases are controlled by four insurance firms, Anthem, Cigna, Aetna and Humana.  Consolidation in the cable industry is now more tightly controlled and Americans are relying on a monopoly provider.  Prices have risen at twice the rate of inflation over the last 5 years. This creeping consolidation across America closes out smaller firms and prevents healthy competition.

The Economist divided our economy into 900 odd sectors.  Two-thirds of them became more concentrated between 1997 and 2012.  The weighted average of the top four went from 26% to 32% and going higher.  In some industries, such as the cable industry, it is a complete monopoly.  This control by large corporations might make you think that more jobs would be created but the opposite is true.  A $10 trillion wave of mergers since 2008 has raised levels of concentration even more.  Financial gains by this concentration has not been passed on to consumers.  It is important to note that only 10% of America’s workforce are employed by companies in the S&P 500.  Most Americans now work as freelancers, government workers or in small businesses across America.  Consolidation has resulted in less employment.

Here are a few points to remember:

Competition can be destroyed by increase in regulations.  Large companies can navigate them.  Small companies cannot. Lobbying has risen by a third in the past 10 years to $3 billion.  New regulations don’t fence in big companies.  They keep out small companies.  With limited working capital and fewer resources small companies struggle with all the red tape and their inability to afford effective lobbying.  America’s large corporations know how to protect themselves from any competition.  The rate of small-business creation is at its lowest level since the 1970’s.  This is very dangerous.  How can we change this situation?  Higher taxes on businesses would deter investments.  Large jumps in minimum wages, the one that California is considering, would discourage hiring.  Government protections of dominant firms would only strengthen them.

Make it easier for startups and small businesses.  Relieve the burden of red tape and laws placed upon them, such as Obamacare.  Stop the spread of insidious occupational licensing.  Now 29% of professions, including hairstylist and even dog groomers need permits or licensing.  Loosen copyright and patent laws that currently are abused by the top firms who milk their discoveries.  Modernizing antitrust laws could also help.  The list goes on.

The large elephant in the living room just sits there waiting for someone to call it out for what it is.  America is not the bastion of free enterprise.  Yes, return on equity is 40% higher than in other countries but the secret to share, it is done by mergers, acquisitions, good lobbying, good lawyers, weak antitrust work, monopolies and the parking of foreign profits outside the country.  It is not done by competition.  To see wages rise and prices go down, we need to pay attention to this important requirement of capitalism.  Right now the game is rigged.  No wonder we have created a Bernie Sanders and a Donald Trump.

If you would like to read more about America’s lack of opportunity and competition, I suggest the article from The Economist “Winners Take All–why high profits are a problem for America”, March 26th.