Looking forward and looking back are always emphasized at this time of year.  The year of the monkey, 2016, certainly was 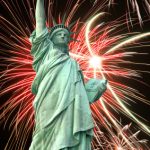 really a doozy.  It’s amazing people have much skin left on their hands as there has been so much hand wringing.  Gnashing of teeth as well.  It has been an exhausting year.  It could look as if the sky is falling–but it isn’t.  Long term, the United States is going to do very well and future projections look good.  We just have some corrections to make as we move forward.

One of the things that America has not addressed very well is its’ dark side.  This effective Pluto transit in Capricorn that has been running through America’s chart since 2008 and completes in 2024 will make us focus on our own dirt.  We revisit a time when America last experienced this transit from 1762 through 1778 when our democracy was created.  Now we are testing the principles that were created during this period.  We are resolving unfinished business from this same time.  Pluto always exposes and this time is no different.  Many things are painful to see and hear but we need to address them.  We are looking at the shadow side of power, greed and our own bias.  The government itself is being exposed for what it is not and what it’s limits are.  Big government will continue to erode as we are given fake news, crazy messages and inefficiencies.  There is lots of unfinished business left over from the earlier Revolutionary days.

You can see what needs to heal and change.  We have elected a person who will help expose dirt, show us the fake news, expose our brashness, and basically weaken both parties.  It looks like an old-fashioned keystone cops movie and it does have consequences.  One of these consequences is very positive, Americans will start to get out of their apathy.  Greater power will start flowing to the local level.  In fact this is the area where you want to be involved.  The effects of forwarding emails to your list and feeling that you have accomplished something is delusional.  Going to your local representative’s meetings and bringing a group of friends to show you either are for or against their actions is powerful.  Remember, all, repeat, all elected officials live for getting elected and maintaining their power.  It is important to get a critical mass of people together.  Remember we won a Revolution by active participation of the citizens.  They didn’t fake it, they lived it.

As we do this, we will get better at self-governing.  It will become very important over the next four years.  Get your neighbors involved.  It will now take citizen participation as the government structure itself is crumbling to rebuild, in time, a new structure.  It might feel as if it cannot protect you.

You will start to see deep changes to the way the US operates.  Some of these are essential to our future success.  Certainly the school system needs changing as only 50% of our inner city high school students graduate.  The kids who do graduate are not necessarily job ready.  We have allowed this to happen.  In Germany, for instance, two-thirds of 15 or 16 year old’s go to vocational school.  These vocational schools work with local businesses so the kids get a certificate that leads to a job.  (Bloomberg Businessweek, December 26, 2016).  Remember too, that 145 million people work in America, 125 million of them work for private enterprise, 20 million work for government.  We hold our firemen, police, teachers etc. in high regard but if you didn’t have the 125 million workers, you can’t pay for the other 20.  Business has to be acknowledged for its enormous benefit to our society.  We just need to understand the difference between outright greed of some businesses and the help smaller and mid-size businesses need to prosper and grow.

It’s all uncertain but it all is progressing.  Charlies Munger, Warren Buffet’s partner for many years has stated it quite well.  He made some famous comments back in 2011 that I think are worthwhile repeating:

“Quitting under adversity or while being frightened just brings contempt.  Living with adversity is the best chance for opportunity.  There will always be panicky people.  If someone else panics and you’re calm, people will remember the calm one:

“You have to be a lifelong learner to appreciate this stuff.  We think of it as a moral duty.  Increasing rationality and improving as much as you can no matter your age or experience is a moral duty”

Public pensions are quite dishonorable.  A police officer who earns $50,000 a year can work all this overtime in his last year and, because of it, collect a $100,000 pension for life.  Of course, people think it’s OK because he’s an honorable police officer.  But it’s evil and overaggressive.  It’s wrong to have people behaving like that”.

“I would be flabbergasted if jobs bounce back.  Unemployment will be a considerable problem for a considerable amount of time.  But it doesn’t have to ruin your life.  I was raised during the Depression, and people dealt with it.  People with gumption today will deal with it.”

“I like people admitting they were complete stupid horses’ asses.  I know I’ll perform better if I rub my nose in my mistakes.  This is a wonderful trick to learn.”

The long term prognosis for America is very good. She will remain the bastion in a world of chaos.  Going forward 10, and 25 years, she does very well.  She just has to complete this Revolutionary period.  Act as if you are a citizen in a Revolution.  Get involved.  Going to conferences is nice but better still is your active participation at the core of governance.  The local level.  We have great imbalance in almost all areas of governing.  If you want this changed, and my letters and comments from you say you do, you must act differently.  It is not enough to listen to the choir, go where you can influence.  The sooner the citizens are actively involved and out of their apathy, the sooner some of this shock and awe behavior will diminish.

We are progressing.  We zig and zag and perhaps retreat for a while, but we are always evolving upwards.  America has a job in the world and isn’t “making America great again”.

8 responses to “America will be fine long term–Get Involved”