Stand with anybody that stands RIGHT. Stand with him while he is right and PART with him when he goes wrong.”  Abraham Lincoln

We all have witnessed the white supremacists march this past Saturday in Virginia.  We are all 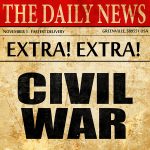 having the opportunity to feel the effects of our own Pluto in Capricorn transit that started in 2008.  In some way we are revisiting the days of the Civil War and bringing out the parts of ourselves that need to be healed.

When America was born in 1776, the planet Pluto would direct the way that the United States would evolve as a nation.  We were born with the planet Pluto in the sign of Capricorn.  It’s South Node of the moon was in Aquarius and its North Node in the sign of Leo.  This means that the rebellion against British rule was necessary for this country to take charge of its own destiny.  By doing so it established the cycle it would operate in for its entire existence.  Because of this North Node being in the sign of Leo, it would reflect that what happens in the world would depend upon what happens in the United States.  It is true to this day.  It was destined to play the role of the leader of the “free” world.

Having Pluto in Capricorn would mean that the nation would have the evolutionary lesson of how to establish their individuality and authority within  a culture or society.  The society or culture represents a collective authority that dictates how individuals are expected to conduct themselves.  Philosophies become institutionalized and politicized.

Another lesson from this Pluto in Capricorn is to learn how to be responsible for one’s own actions.  Individuals who may have manipulated others to achieve their own goals will come back with subconscious guilt patterns as a result of prior lives misbehavior.  You see this pattern in the German people who have national Soul guilt as a result of the holocaust.

In America there are subconscious guilt patterns over the treatment of African Americans and slavery.  We are just coming to terms with this guilt as we revisit the same Pluto in Capricorn at our birth.  We have never had to deal with it as we will now.  The awareness of this transit enforces lessons of social and emotional maturity to grow up and get on with being a fully integrated world nation.  This transit must occur to enforce this lesson in our lives.

If the United States will reflect upon the evolving nature of its structure and allow for structural changes, its outmoded behavior will weaken so that growth at various levels of reality can occur.  The rise and fall of nations occurs as its awareness enforces or discourages social and emotional maturity.

All the outmoded behaviors are now out there for you to see.  We even have a President who is part of the outmoded structure.  His reluctance to criticize the Far Right movement and his inability to accept blame for his actions or his mistakes reinforces the old ways with its inability to assimilate.  America is at a crucial crossroads where it is facing its own mortality.  There is a sense in America, because of our Pluto in Capricorn, that all of us have a deep “inner sense of what is ultimately right and wrong.”  ….We may not know exactly why something is right or wrong; our judgment derives from this inner sense or intuition.”  “Pluto The Evolutionary Journey of the Soul, Volume 1, Jeff Green.

Will the South rise again?  Will the Confederate statues (there are still 700 of them out there) stand?  Will we revisit the modern day forms of Jim Crow laws?  Do we really believe that the white male in this society has been segregated and treated as second class citizens?  Will we speak up or will we remain silent?  It is America’s moment of truth.  It had to happen now.  The new structures will come out of the old during the remaining years of this Pluto in Capricorn transit or America will not be the world power it is today.  “The day will come when the United States ‘will fall from grace.’  One day it will not be the world power that it is today; it will be one nation among many.  This will force a restructuring of the national Soul so that a new collective self-image can evolve.  The national sense of security linked with being a world power will have to change as a result of this evolutionary necessity.”  “Pluto, The Evolutionary Journey of the Soul”, Volume 1, Jeff Green

The day has come, the path is being revisited.  We are on our way to a new collective self-image.  You are watching the action in the front row seat.  Do you like what you see?  Do you understand the national Soul of America?  Are you willing to do what it takes to help her take her place among nations?  It will not be done with bullying, lying, cheating and leaning on guns and religions.  It will not be done by blaming others for our own mistakes.  We are having to learn to be responsible and aware and that can be the hardest part.