By now I am sure you have met Kellyanne Conway on most of your major media outlets.  She has been 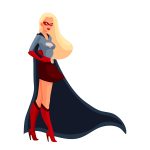 working with him since the summer 2016.  She is the  smart, blonde women who is quick to respond to negative comments about Trump and has been his loyal representative since Ted Cruz lost the primary.  Kellyanne originally worked for Cruz in the recent election.  When he lost to Trump she was brought into the Trump camp and became his campaign manager this past summer.  She ran his campaign for 10 weeks through the election.  Her background is steeped in conservative politics and Republican issues.  She is firmly against abortion.  She has also worked for Vice President Elect Mike Pence as well as Newt Gingrich.

Kellyanne’s true name at birth was Kellyanne Elizabeth Fitzpatrick.  Her father was Irish and she was raised by women after her parents’ divorce when she was 3 years old.  Her Mother, Grandmother and other female relatives raised her.  I am sure this has given her a strong preparation for female leadership.  She was born on January 20, 1967 and on inauguration day, she will be 50 years old.

You will hear and see much more of Kellyanne Conway (her husband of 16 years is an attorney as is Kellyanne).  She has some pretty strong numbers and is a force all her own.  I believe that she will one day run for office as she has numbers that support this direction.  Trump is just a stepping stone for.  Hopefully, he will be a good influence.  My questions is how long will she stay with him.

Kellyanne was born with a Master Number 44 Life Path.  This is big and is the boss.  She may be one of the most powerful persons he has working for him.  She has to lead and cannot stay a subordinate.  Master Number 44/8 is a result of adding up her full date of birth and reducing the numbers.  Usually a Master Number Life Path of the number 44/8 indicates past live (s) where much power was gained, some of it through ruthless means.  This is Kellyanne’s lifetime to balance this Karma and to put her energies to work for the world’s underprivileged.  It will not work and will come back at her if she just goes for the power.  The number 8 is the number of karma and is ruled by the planet Saturn.  Owning the number 44 is great in that it gives you great stamina and energy but she must learn to efficiently manage her energy, time and money in that order.  She must use her power to advance humanity.  She must maintain strong ideals and work with people of wealth and power to promote harmony, philanthropy and large visions that improve society.  If she does not, there can be large failures.  She cannot ignore higher aspirations of the Soul.  If she tramples over others or becomes too egocentric, she could abdicate her greater possibilities and become a workaholic (through the numbers 44) and be relegated to minor positions with restricted activities.

She is very smart and graduated both Magna Cum Laude in 1989 and later Phi Beta Kappa with a J.D. with honors.  Her work ethic is strong but she may take on more than is manageable.  She is the mother of 4 children and must juggle these enormous responsibilities.  She has dual personalities the numbers 8 and 6 (from the consonants in her name).  Both of these lead.  The number 6 always believes they know what is best for you.  Her Soul numbers are 3 and 5.  Both of these are communicators and sales persons.  She can talk quickly and sell what you never thought you needed.  Her destiny number or the direction she needs to go with this life is another Master Number, the 11.  Here she becomes the inspirational speaker, peacekeeper and negotiator.  These are powerful combinations.

What is her achilles heel?  It is the number 4.  It is missing in her name.  She is overdoing this number as most people do when missing the number 4.  She is a workaholic.  This will not go well over time.  Kelly misses the energy of fire in her chart and you can easily see this on many of her interviews that she is really burned out.  With Master Numbers, especially the number 11, they have finely tuned nervous systems and so does Kellyanne.  If she does not watch her energy levels carefully, they will fail her.  This is especially true of 2017.  This is a very karmic year for her and matches her karmic missing number 4.  She will be forced to work very hard.  Trump has a number 4 Life Path and prizes hard work.   I would not be surprised if later in 2017 or sometime in 2018 she leaves this position .  She is going through an identity change that completes itself in December of 2017.  She will need change in 2018.

If she does leave this position, she does not leave politics.  She may need to make changes as she conducts her life but she was born to be in politics and government.  (She has her own polling company called “The Polling Company/Women Trend”).  She cannot be a normal politician and expect to last.  With these powerful Master Numbers, more is demanded of her.  She will have to be very honest, be very fair and not look to escape the issues.  There is a need in her chart to create healthy escapes.  Due to a tough childhood, she created escapes.  Her physical needs were met but not her emotional needs.  As a result, she understands how people suffer and she can help to relieve the general suffering of the human condition.  The question is will she succumb to ruthless power or take the higher road of conscious leadership?  It is her choice.  She is and will be tested in this lesson.