Chelsea Victoria Clinton, born February 27, 1980 is our second post on the powerful daughters of our 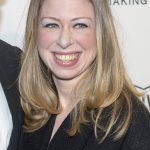 Presidential candidates Donald and Hillary.  Chelsea is definitely her parents’ child.  She has the same life path (the number 11) as her father and the same destiny (the number 3) as her mother’s life path.  All her numbers point to inspiration, the gift of the word and the soul and personality of the server.  I would wager money that this women will be a political figure or an important public figure.  She was groomed for fame and has the same life path as Bill Clinton, Barack Obama, Ronald Reagan, John McCain etc.  Her greater work will not begin until she gets in her mid 40’s and most likely 50.  She has the ability through her Master number 11 to deliver inspiration.  This is what these other leaders have done.  For better or for worse, they are all inspirational figures.

To top it off astrologically, her sun sign is Pisces and is the same as Hillary’s moon in Pisces.  They are emotionally tied.  Her moon sign in Leo is the same as her father’s sun sign in Leo.  She literally can reflect the light he shines on her back to him. Powerful stuff.  Being the number 11 life path, she is the consummate peace keeper.  Master number 11’s take time to be groomed and trained to lead.  Most do not come into their own until they are in their 50’s.  They get better with their abilities.  They can move a room to tears and write and compose a piece of music that can make your heart stop.  They are wonderful arbitrators and negotiators.  Many times they can be too indecisive.  This was easily seen in both Bill Clinton and Barack Obama’s behavior.  Her chart is loaded with Virgo energy which is an earth energy so she is very grounded and has good healing abilities.

The only missing number in  Chelsea’s chart is the number 7.  This means she has to learn in this lifetime to be more discerning and to not take things at face value.  The need to ask questions, go deep into a subject matter and develop the intellect is very strong.  It is not surprising that after graduating from Stanford she went on to get her PhD in International Relations from Oxford.  She is one smart women.  Her soul and personality are both number 6.  She has a strong need to be the caretaker, to be of service and to be needed.  She loves having her own family.  Many people with predominant number 6 in their chart go into politics to fix the world or their small piece of it.  Certainly almost all the recent presidential candidates had a prominent 6–including Hillary (Trump does not have a predominant 6).

To top it off, Chelsea was born on a 27 day.  This delivers the born leader as well as an efficient manager.  She can organize and inspire others.  Those born on a 27 day tend to be late bloomers and need to take time to prepare.  Deep in her heart, she has a great dream for humanity.  She sincerely wants to improve conditions of people.  Her deepest satisfaction lies in performing some great task that will benefit others.

It is easy to become cynical but Chelsea is waiting in the wings to serve.  Even if her Mother lost the election, she would still be prepared to step out on her own.  Her Master number 11 is on a mission or assignment and will eventually impact the world.