When I was little, I would visit relatives in the Detroit suburb of Wyandotte.  It was just wonderful.  I would go into Detroit and 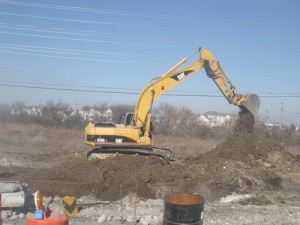 Breaking up is hard to do!

get my hair cut at Hudson’s Department Store, have a wonderful tea lunch and buy lovely dresses in the children’s department.  Detroit was a bustling big city and whirled with life.

Flash forward to the 90’s when I had to visit the city on business.  It was really ugly.  I walked down streets with abandoned manufacturing plants.  Windows gone and literally wind blowing debris up and down deserted streets.  It felt like a bombed out city then.  I had to travel to Pontiac to visit GM and I felt downright threatened just to be there.  It was eery, scary and smelled of decay.

Why has it taken so long to file bankruptcy?

The question I wonder now, is why has it taken so long for Detroit to file bankruptcy?  It was like a lingering cancer that wouldn’t let the patient die  but would continue to eat it to death.

Last year I had to return to downtown Detroit for a big birthday bash for the family.  We, my four children and I, rented an SUV at the airport and drove to the party.  That was wonderful and grand but then we decided to go to the Tiger’s baseball game in their great new stadium.  The stadium was fun and the fans loyal but the area!  We parked in a protected, paid lot but when leaving the lot, we were told to move the car as they couldn’t stop someone from “jacking” the car.  It seems just pumping your gas in daylight or parking the car in the wrong “safe” spot could cost you.

Although your city may not be Detroit, or come close to their situation, we should take a look at what Detroit is telling us.  Here was a city that was basically a one trick-pony.  It did cars.  It did big, fat American cars driven by big Americans on wide, Midwest roads.  It never paid attention when the Japanese put their toes in the water  in the 70’s and started to supply America with smaller, inexpensive cars of good value.  Detroit was unable or unwilling to adapt to the changes.  Instead, it made itself less competitive by heavy union expenses and lower quality workmanship.  Its’ priorities were not innovation, diversification or education.  It’s priority was the status quo, profits and protection of the huge payroll of auto workers.

Over time, whites fled the inner city, the population dropped to almost half of what it had been and the tax base from businesses cratered.  The auto plants moved to other states with right-to-work laws and the Japanese cars took over the markets.  Now the market is global competition with Japanese, German and Korean top sellers in America.  Here on the West Coast, unless you are driving a pickup, your car is most likely to be one of the foreign manufacturers.  The government threw a lifeline to General Motors and Chrysler when they were filing bankruptcy and they have managed to stay afloat but not Detroit.  The train left, the party is over, the clean up is ugly and they will fight it out in court.  The lawyers will be the winners.  Even as recently as last Thursday, the unions have sued in the courts to stop the bankruptcy stating that they have it written in the State Constitution that retirement benefits are protected from bankruptcy.  Is this a joke?

What does this mean for other American cities?

What does this mean for other American cities that cannot pay union benefits for retirees and general-obligation bonds.  Coming down the road, Oakland, California, Chicago and Philadelphia.  Just this past week Chicago laid off 2100  public school employees.  Mayor Emanuel blames it on the $400 million spike in pension payments.  Moody’s downgraded the city’s general-obligation bonds due to rising retirement and debt service costs.  Oakland recently laid off 100 police so they could fund retirement benefits and pension-obligation bonds.  Guess what, murders and robberies went up nearly 25% in 2012.  Oakland is trying to ward off deeper cuts to city services and is borrowing additional $210 million to finance pensions.  (Wall St. Journal, July 22,2013)  Is this a joke?

Here is what Detroit citizens now experience: inadequate and old fire department equipment, leaky hoses and old trucks, highest property taxes in the state, police force cut by 40% in 10 years, police response times are five times longer than the national average, 70% of the parks have closed since 2008, the business tax has doubled in 2012 and four in 10 street lights do not work.

This challenge of the municipalities to do the right thing and take care of its citizens first is becoming more and more difficult.  Cities are watching what happens in Detroit to see how the court rules in handling the investors and the employee benefits.  If you think it cannot happen to your city or your muni-bond investment, think again.  Who are your employees running your city?  Who did you employ in office and what have they done behind closed doors that you are now responsible for?  Do you know?  Do you care?  You better!  Mayor Rahm Emanuel of Chicago has warned that pensions in Chicago will triple by 2015 and the bill could force a 150% spike in property taxes.

Los Angeles has the highest paid city council members in the nation.  Their base salary is $178,000 plus benefits, including staff, auto, pensions etc.  These are elected employees of ours who either came out of other political positions in Sacramento or were staff members for other City Council members.  All are men, all are basically professional politicians.

Pay attention to your cities.  Detroit is the canary in the coal mine.  She was easy to ignore but her death is not.  It should strike a warning bell to us all that you need to know what is going on in your city.  Who is minding the store and who do your employees think they work for?  Do they work for you?

5 responses to “Detroit’s Metaphors for America”