Fish Stinks from the Head Down

“He that can’t endure the bad will not live to see the good.”  Jewish proverb

Fish stinks from the head down.  We’ve probably all heard this expression and it wouldn’t have lasted all 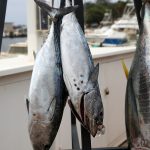 these years if there wasn’t some validity to it.  When looking at a group whether it’s a corporation or a government, it is wise to look at the leader.  The leader sets the tone of the organization, the leader attracts the type of members that will belong to the group and also agrees to the actions and behavior of the group.  In short, when looking at why or how a group or organization acts, look to the leader.

Over the last several months we have seen a very chaotic leadership running the United States.  We have seen bizarre behavior, contradictory statements and a general lack of progress.  Executive orders have become the way to make change in Washington.  Unfortunately, it is not the way to get real change.  That has to come through legislation and that doesn’t seem to be moving much anywhere.  Executive orders make good sound bites and can do temporary changes but they can be overturned by another Executive order from another “Executive”.

I have said before that this administration will be fraught with investigations, law suits and an ongoing change in staff.  This will not stop with time.  They will continue as it is the nature of the leadership to be embroiled in law suits, investigations and bizarre narratives.  There should be a reprieve beginning mid May to early July and then it really revs up again.  There are about 7 weeks of relatively normalcy and then it gets going through September.  Do not expect much change from the leader.  We always revert to our true nature when under stress.  It is a matter of time.  Trump has a wounded Saturn in his chart and he will not take to any type of criticism or ridicule.  He takes the bait every time.  He values loyalty and yet he complains of disloyalty through the leaking within his own administration.  He doth protest too much.  The tweets are a dead giveaway of his wound.  He believes the best defense is a good offense and so he continuously offends.  Anyone who sees themselves as always under attack, will eventually be under attack.

What we could do as citizens is become much more engaged in our own responsibility in running the country.  This is a government of the people and by the people.  Yet, the people are too busy with their latest distraction to truly get involved in the running of their government.  We have passed it on to representatives who first represent themselves and second, represent us.  We have dumbed  ourselves down and we are angry that it isn’t working.  We have been through much harder times in the past and we have weathered them.  We, the United States, have a remarkable ability with our number five life path to reinvent ourselves.  We will do it again.

If fish stinks from the head down, then what does it says about us?  The citizens.  What are we doing that created this type of leadership and what do we need to do to improve it?  Did we abandon our own responsibility to help America through its “second revolution”?  Did we just complain and forward emails?  Did we stay silent when we should have spoken up?

Thomas Paine, the great thinker and prophet of democracy who wrote “Common Sense”, “Crisis”and “The Rights of Man”, impressed many around the world through his famous writings encouraging humanity and freedom.  In the last issue of Crisis published in April, 1783, Paine wrote: “The times that tried men’s souls are over.  The greatest and grandest revolution the world has ever known has been gloriously accomplished.  Let us now bear prosperity and success as well as we have borne distress and woe…….Our ideal is to teach the world how to be happy.  A new creation has been entrusted into our hands, to exhibit to the Universe a character hitherto unknown.”  He also suggested many ways for improving the living conditions of Europe.  He advocated pensions for all persons over fifty says “Use the money now spent on war in this way.  It is painful in so-called civilized countries to see old age working itself to death.”  (The typical life expectancy during the American Revolution was age 36) (1750-1800).

The soul signature of the American Constitution is to be found in the astrological chart of this document.  The configurations indicate “the the masses in this nation will never allow themselves to become enslaved by vested interests, national or international.  This is a land dedicated by the people themselves to serve the best possible interests at all times of all the people, and no one specially privileged class at the expense of the another”  Corinne Heline,
America’s Invisible Guidance.

America is revisiting her original Revolution as she transits with Pluto in Capricorn.  As I have said on numerous occasion this isn’t over until 2024.  Each of us has a role to play in making sure that our leadership is selfless and truthful possessing inner authority which an “old soul” radiates.  Picture calmness, graciousness, dignified, strong and wise.

Does our current leadership possess these qualities?  What do each of us need to do to create the leader America deserves.

5 responses to “Fish Stinks from the Head Down”