Is Attending Another Women’s Conference Enough?

In approaching the 21st century and the beginning of the 1,000 year stretch of the influence of the number 2 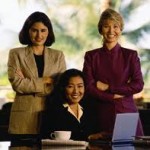 (the years 2000 to 2999) women have become more visible and more vocal.  Considering American women got the right to vote in 1920, it is almost 100 years of pushing, shoving and expecting things to become more equal in the rights and treatment of women.  I remember marching with several high powered women back in the 70’s.  Those were the days of bra burning and other representations of female “freedom”.  That was also over 40 years ago.  Things have improved but one pattern remains, women’s conferences.  It seems every state and medium and large cities have women conferences.  They are fun, they have interesting panels.  They motivate and inform but do they really empower?  I just went to a great one here in Los Angeles in June but I have to say, when the dust settles, it was basically the same motivational information I have been hearing for a long time.

There was a recent article in the New York Times, August 14th, by Peggy Klaus “Women Can’t Fix This Alone”.  It speaks to what I have said in workshops and in talks, women need to greatly improve how they network.  It’s important to know how to network with men who hold the majority of power both in the government and corporate worlds.  Practicing with other women is important but only a piece of the ability to succeed.  Women need to learn how to effectively network with men and women.  Women tend to network with one another.  It feels safe and less threatening but statistics speak for themselves.  “Naysayers argue that women gathering to help one another in business may have gotten them in the door but has done little to advance.  In fact, while the first woman was named CEO of a Fortune 500 company 44 years ago, today only 22 women hold that distinction.” (Peggy Klaus)

Klaus cites Belinda Parmar, who heads up “Lady Geek”. She stopped speaking to all-female audiences after she experienced men leaving the room before one of her talks.  It was perceived by the men as a female-only event that didn’t engage men.  She goes on to say that “sidelining men while trying to improve the staus of women is wrongheaded.  This is not a women’s problem but a ‘society problem.'”

Women need to look more deeply at the issue of female empowerment and where current methods of “women’s conferences” can possibly stifle the very goal perceived by the conference.   Many corporations and states rely on women’s conferences to advance women’s success.  Instead it can be a trap or a delusion that provides lip service rather than concrete results.

2 responses to “Is Attending Another Women’s Conference Enough?”