We are only 15 years into the new millennium but the changes taking place are quite dramatic.  Aside from the fact that we didn’t have smart 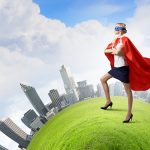 phones, tablets, Facebook and driverless cars, we also were not as aware of the presence of women in leadership positions.  We didn’t realize that along with the ending of the previous millennium we were about to embark on a societal shift that would permanently impact all of us.

The number two is a feminine number.  The number one is a masculine number.  When we left the last millennium (1000 through 1999) we began the journey of the rise of the feminine (2000 through 2999). This is a one thousand year period and we can expect gradual and permanent changes to our culture as it winds its way through all our lives.  Just in the last 15 years, old issues pertaining to a lack of female world power have been placed on the front burners.  Films pertaining to female abuses around the world are playing in mainstream theaters.  Glaring imbalances in government, business, religion and finance leadership positions make daily headlines.  In a nation that has approximately 50.6 % of the population female, only 19% of the House of Representatives and 20% of the Senate are female.  This is a challenge in almost all areas of our society.  Only 19% of corporate board members are women.  This number has barely budged over the last decade.  Over 62% of men and only 45% of women had considered running for political office.

The number two, however, will keep pushing women out and help them become more visible.  Visibility is the key.  Without it, we sort of hide behind the blue burka.  Women will become more willing to place themselves in uncomfortable positions.  It is now in the process.  Certainly the young female student named Mahala, who was shot in the head by those who wanted to stop female education, is leading one of the charges to help young girls become educated.

There is much work for women to do to learn how to step into power positions.  She will become more of a risk taker and more confident.  It will take time but the horse has left the barn and she is on it.  She will learn power language.  She will regularly upgrade her skills and she will learn what is needed to place herself in political positions of power where she can influence.  46% of childless women had considered running for office and 49% of women with children under 7 had thought of running–essentially, having children made no difference.  The Los Angeles Times reported  on May 3, 2015 in an article by Cathleen Decker that what keeps women out of office are the overwhelming scrutiny, the complicated logistics, the demands of fundraising and the innate nastiness of today’s politics.  She cites that the biggest pressure is the pressure women place on themselves to be perfect at everything.  Keep in mind that the Presidential candidate Scott Walker (who recently dropped out of the race), didn’t have a college degree but didn’t think twice about running for president.

I have had women say that nothing changes, or it is taking too long but they didn’t realize that timing is everything and that the timing wasn’t there for the big thrust forward that awaits us.  Starting in 2024, women replace many of today’s leaders in all areas of our society.  This will keep rising going forward.  Do not despair, build connections and capitalize on your networks.  Preparation is about to meet its opportunity.  There is nothing that can stop an idea whose time has come.