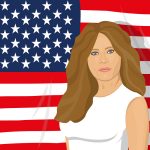 of Obama, Trump, McCain and Clinton.  I did do Michelle Obama’s as well and I thought it might be interesting to take a look at Melania Trump.  We read very little about her and she doesn’t appear to appreciate the limelight of public office.

First of all, her birth name is Melanija Knavs.  It was later changed to a more Germanic version, Melania Knauss.  This is the name she uses as her birth name.  In Numerology, however, we always use the first registered birth name.  (We never use Baptismal or Christening names).  Her birth date is April 26, 1970.   She was born in Slovenia which was part of Yugoslavia at the time.  An Eastern block country.  In Numerology we do not need the birth time but it is safe to say she was born close to Greenwich Mean Time.

This birth date gives her a number 11, Master Number Life Path.  (We arrive at the Life Path but adding all numbers together of her birth date.  Master Numbers are important as the owner is usually on an assignment of higher calling.  The individual can ignore their master numbers but sooner or later it will catch up with them.  For instance, Attorney General Jeff Session is also the Master Number 11.  We like to think of this master number as learning about inspiration, peace keeping, cooperation, the potential to channel information, interdependence.  It doesn’t always work out that way.  The individual can drop down to the lower number 2 and operate at an entirely different level.

Regarding Melania, it remains to be seen whether or not she will fulfill her true Life Path.  She is only 48 and not yet integrated into her full self.  The transition comes during her 7th Soul Cycle or the age of 49 to 50.  This is a critical year for growth.  This is when a person begins to free themselves from self-imposed should’s.  People wonder when Melania will “come out of her shell”.  The better question to ask is when will she become engaged in her true assignment.  I expect her to go through much Soul searching beginning on her next birthday when she will go through inner turmoil through 2020.  It is interesting how it all coincides with the 2020 election.

Melania has a number 7 personality.  This gives her the quality of privacy, refinement, interest in how things work and wanting to know.  It is not a people-oriented number but a greater interest in the mind and intellect.    The personality is derived from the consonants in the name.  Her Soul number, derived from the vowels,  is the number 9.  This gives her a more humanitarian quality.  Deep down she is interested in human suffering and how she can help improve the human condition.  There is great practice of letting go when this number is one’s Soul number.  She has been an humanitarian in prior lives.  Her destiny number, derived from the total of all her letters, is again the number 7.  She can be reclusive, critical, judgemental and, again, very interested in intellectual pursuits.   She needs to be around smart people as stupid people or non-thinkers bore her.  There is definitely the air of refinement around a person who has so much number 7.

She has three karmic lessons within her name.  They are numbers 6, 7 and 8.  She has challenges in the area of commitment (family responsibility and being of service), (the missing 6), discernment, not taking things at face value, questioning, not being too overly intellectual or not being intellectual at all.  An example could be avoiding higher education and the lack of desire for higher education.  (the missing 7).  The missing 8 can produce a very ambitious person, but a person who hears advice as criticism, especially during the younger years of life.  The missing 8 person can make money, lose money and make it again.  They are being tested in their love and balance of the material world.

Melania has given herself a personality and destiny of her missing number 7.  This helps her with this karmic correction.  She also is born on a 26 day (a number 8 day) and this gives her some of the elements of the missing 8 although it doesn’t dismiss much of the karma attached to the missing number.  It is the missing number 6 that is very strong in her chart.  Missing number 6 individuals have an issue about commitment and responsibility to others, family and community.  They can have a hard time committing to marriage and other important relationships.  They even have a hard time committing to themselves.  They are to learn much about true emotion.    Many missing 6 individuals can feel very isolated and alone and not know why.  It is usually because they stay so heavily guarded.  They say the nice things and put up a show of emotion but it doesn’t truly communicate care and affection.  It not unusual for a missing 6 person to be given the responsibility of the family, both intimate family situations as well as family of origin.  It doesn’t surprise me that Melania is raising and responsible for her parents as well as her child.

Looking at her energy package, her astrology aspects, she is heavily laden with planets in Taurus.  Her moon is in Capricorn.  With a big Uranus in Taurus transit now in effect, there will be many sudden surprises in store for her life over the next 7 years.  Looking at her emotional aspects, there is an issue with Mother love or the way she was nurtured.  It is hard to tell how that would play out.  Possibilities could be her Mom was cold, unavailable or indifferent early in life.   This can be healed later in life but it sets an imprint.   One of the things that is very clear in Melania’s chart is that she has had to overcome the lack of value of herself.  This is a similar aspect of Nancy Pelosi, minority leader of the House.  People with this aspect have had to fight themselves over their own self-worth.  They have to learn to value themselves.

There is a strong earthbound nature to Melania’s chart.  It is tied to the material of the earth.  That means attachment to material goods.  It is very important for her to have only the finest.  In marrying Donald Trump I am sure she saw the opportunity to have them.  She met him during her Saturn return when she was just leaving childhood and learning out who she was, the end of her 20’s.   One of the qualities of Melania’s chart is the need for a person to be useful to them.  Crudely put, “how can I use you, or how can you be useful to me?”  In marrying Trump, this question was answered.

Melania has yet to come into her own but I would expect she will.  She has a strong chart to be an inspiration for others and has the ability to teach others.  She, first, must come into her own.  Her “causes” of bullying may sound trite but she does believe it worthy.  I am sure she looks at the whole administration picture as a means to an end and she is a very strong confidant for Trump.  She has terrific common sense and can see through people easily.  This is powerful stuff.  He may listen but his own persona will go its own way.  She will stay the private person, out of the way and commute to New York where she is more comfortable.  When his Presidency is over, she may stay married to keep her commitment but she will go her own way with her work and interests.