The New Canary in the Coal Mine

were working.  They knew that if the canary died while in its cage, it was not too long before the miner would also be felled by the air that was in the mine.  It was the miner’s warning to get out of there and to do so quickly.

Today, we have signs of potential danger from nature and its various species, frogs, bees and human blood cells.  I like to follow trails and the clues left on them to see what is coming up for the current “miners” working in our daily lives.    In the last few years we have received scientific reports of frog mutations and mysterious deaths of the honey bee.  Since we cannot survive very long without the honey bee pollinating our crops, I thought you might be interested in the following announcements that have made their way quietly to the media and in scientific journals.

“Future Edition” from the Arlington Institute reports regularly on news from various world sources.  Here are a few of the gems from their recent edition.  Please check them out for yourself.

Purdue University scientists may have identified one of the sources of deaths of the honey bee. 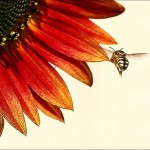 WHAT HAS HAPPENED TO OUR BEES?

“Analyses of dead bees is showing the presence of neonicotinoid insecticides which are commonly used to coat corn and soybean seeds before planting.  The research is showing that those insecticides were present at high concentration in waste talc that is exhausted from farm machinery during planting.”

The “Atlantic”, January 9, 2012, is reporting that there is a real danger of genetically modified foods.

Chinese researchers have found small pieces of ribonucleic acid (RNA) in the blood and organs of humans who eat rice.  Just about all of us eat rice.  This report is put out by Nanjing University and their team showed that this genetic material will bind to receptors in human liver cells and influence the uptake of cholesterol from the blood.  The type of RNA is called microRNA (or miRNA) due to its tiny size.  These miRNA’s were discovered about 10 years ago and have been extensively studied.  They have been implicated in several human diseases–cancer, Alzheimer’s and diabetes.  They usually function by shutting down or turning down certain genes.   The Chinese research is the first in vivo example of ingested plant miRNA surviving digestion and influencing human cell function.  It could mean that when we eat these foods that have been genetically modified, we might be eating gene regulators along with our protein, vitamins etc.

Here is another gem from “Natural Society”-January 3, 2012–US to start ‘Trade Wars’ with nations opposed to Monsanto, GMO crops.   Natural Society is saying that the United States is threatening nations who oppose Monsanto’s genetically modified (GM) crops with ‘military-style’ trade wars.  This information was obtained and released by WikiLeaks.  Basically WikiLeaks information reveals how deep Monsanto’s roots have penatrated key positions with the US government.  Supposedly, WikiLeaks is stating that many US diplomats work directly for Monsanto.  The WikiLeaks cable reveals that in late 2007, the United States ambassador to France and business partner to George W. Bush, Craig Stapleton, requested that the European Union along with particular nations that did not support GMO crops be penalized.  Nations like France that has moved to ban one of Monsanto’s GM corn varieties, was requested to be ‘penalized’ by the US for opposing Monsanto and genetically modified foods.

This a trend that needs watching so that we can live healthy, long lives.

2 responses to “The New Canary in the Coal Mine”