Over the eons of time countries have built walls in hopes of saving, protecting or just plain obstructing someone or 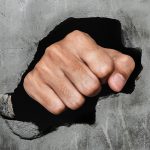 something from another someone or something.  We now walk the Great Wall of China and see it as an historical and architectural symbol.  We see walls all over the world as a testimony to a person’s idea of “saving” someone or something.  It’s only a matter of time before they weaken, dissolve or crumble away.  They are still looking for the Walls of Jericho.  Remember the Berlin Wall, it wasn’t brought down by guns and bullets.  It was brought down by consciousness and it will be consciousness that will go over, under and through any wall, new or old along the Southern border of the United States.

America continues in the clean up of her first American Revolution.  We are dealing with issues that have to do with the principles under which this country was founded.  The turbulence that we are experiencing and will continue to experience as we finish up this period will not completely end for another 13 years, until the end of the 2020s.  The breakdown of old systems in the political structure, the threats from climate change, the old white male leadership model, the challenges to wealth, the challenges to our supremacy, the challenges of our land ownership will continue to play out over the next 13 years.  Reversals begin in the year 2024 so we have some messy 7 years ahead.

Trump is a symbol of the shadow side of America.  He represents all the old stuff we have tried to avoid looking at in our personality, our ego, our appetites and our prejudices.  He is perfect.  If he hadn’t come along, who else would be there to rattle us out of complacency, apathy and blindness?  Who else can exaggerate, provide alternative facts, provoke, bully and delight in not knowing what he doesn’t know?  America must now look at its focus on individual freedoms, how it economically gains and how it isolates.   He is a necessary step for America’s evolution.  Once we have progressed more and completed the transit of Pluto in Capricorn by 2024, we will be ready to make the changes that will compel us to add amendments to the American Constitution.  We are not ready to have the rebirth of the United States as a “member of the world” rather than just the “leader of the world” as we see ourselves today.

Which brings me back to the “wall” with Mexico.  In the last 20-30 years, our relationship has been a very positive and growing relationship.  Billions of dollars of trade benefit both countries.  Many of the products that Mexico exports to the United States contain US made parts.  To start a trade war with Mexico and dictate to it that it will build a wall and pay for it is somewhat akin to telling your feet that unless they walk better, you will cut off their toes.  The toes will miss the foot and the foot will continue to experience constant radiating pain.  Believe me, if we place an import tax on Mexican imports, the taxpayer will pay and prices will rise in food, cars and various other products–most importantly tequila and beer.  Unfortunately Trump doesn’t drink so he can’t appreciate the pain and suffering with higher prices on these products.  Maybe he likes avocados.  That is only one fall-out effect of a tax imposition.  I am sure he and his group have other punishments up their sleeves to help him win his fake battle.

Immigrants will still keep coming through Mexico.  They are coming from all over the world.  (We have a much bigger problem with legal visitors outstaying their visas)  If Mexico loses any reasonable amount of income from trade with the United States, they can pull money out of their work along the Southern border of Mexico that is currently trying to stop Central America migrants trying to get to the United States.  Not only are Central Americans trying to reach the US but so are immigrants coming from the Middle East and Africa.  This is a key time to have full cooperation with Mexico  and not try to throw mud at their houses.  Besides, they are helping us hold back the enormous drug trafficking that sits on the border.

Consciousness will always find a way to seep through governments, towns and businesses.  Dictators, Emperors and other strong men will always try to hold power through intimidation and blackmail.  It can only last so long before it collapses.  This wall extension is more to flatter Trump and play to keep his base.  His popularity at this writing is only 36%.  I would be worried if I were he.  The question is what damage will be done during his reign?  Last Saturday’s Women’s March was the largest march in modern history.  Not only was it local but it became international as a show of solidarity for positive change and a rise in consciousness.  It is now only a matter of time before this protest takes on solid action and will change the power base of both parties.

Consciousness will continue to rise and it will permeate the cities, towns, states, houses, jobs, relationships and eventually Washington, D.C.  Before we can be a United States of America, we must expose the shadow to the light and heal our self-righteousness.  Pride goeth before a fall.  36% popularity will not save a Trump administration.