WHY AMERICA WILL CONTINUE TO PROSPER

The headlines and blogs tell of misfortune and struggle for America and Americans.  For many it looks as if the

country is going in a downward spiral.  We have a Congress that borders on a sideshow, citizens arguing over gun control, abortion, entitlement programs, illegal aliens, corporate greed and a long list of various and assorted agendas.  There is hardly a positive note in the bunch. As I write this today, January 21st, Inauguration Day in Washington and Martin Luther King Jr’s birthday celebration, I am reminded, though, of the beginning of this country and the purpose for which it was founded.

It is important to go back to the beginning and look at the birth date of the United States.  She was born on July 4th, 1776.  This gives her the Life Path of the Number 5, the agent of change.  She was born out of idealism and was an outward, visible sign of what was to come–the new Aquarian Age.  It would be an Age of Reason, Enlightenment.  The impulses of the Aquarian Age were just starting to impinge upon the earth when America declared its independence from King George.  The divine right of Kings was being replaced by the divine rights of man.  Hence, the beginning of all men being created equal and that they are endowed by the Creator of all with certain inalienable rights including life, liberty and the pursuit of happiness would be introduced to the world.

This ushering in of the Aquarian Age and its Age of Reason and Enlightenment will last a few thousand years and gradually bring enlightenment, reason and respect for the rights of the individual.  I occasionally get emails letting me know that there is very little reasoning out there and that people do very little analysis of information, much less appear enlightened.  It is important to understand that all of these changes take time.  The word “gradual” should be in bold letters to remind us that we are progressing.  We are continuing to assimilate various points of view and various nationalities.  As we improve our abilities, we send out to the world the possibilities of freedom, liberty and the pursuit of happiness for all.  We have been chosen to be the “introducer” to these qualities so that others can experience them.

Here are some high points to remember about America. 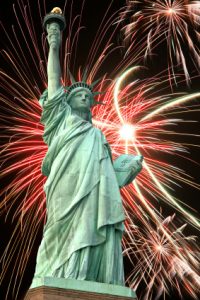 She has a very unique soul and destiny.  Her astrological chart has her birth  sign, Cancer, her Jupiter, Venus and Mercury all in the same sign. (Extremely fortunate)  Her midheaven of her chart is in the sign of Aquarius.  Her viewpoint is Aquarian.  Many of those who put the Declaration together as well as the Declaration of Independence had prominent planets in Aquarius in their charts.  These combinations assured America would be a very abundant country, very productive (being born on a 4 day) and the richest country in all the world.  Remember this, America has gone through a Revolution, War of 1812, devastating Civil War, late 1800’s Depression, World War I, the Great Depression, World War II, Korean War, Vietnam War today’s wars and the Great Recession (which is still continuing) and yet people still want to flock here, people still want to loan her money, they trust her laws, they buy her food all over the world, they buy her property because she honors laws, she educates the world’s children and last of all, freedom.

America is going through another transformation.   It began in 2008.   She must review the plan she began by her Declaration and see what needs to be changed.  She will experience huge swings in employment as global competition becomes a factor, she will have to eliminate wasteful programs and change laws and taxation but she will prosper even more as a result of her willingness to go through the self-examination and correction period.  Her genius is her ability to change and to share.  She is blessed and lucky.  What a combination!  Her role has always been assimilation.  She is superb in doing this–no matter what the headlines say.  My doctor is from Israel, another is from Germany.  My gardner is from Mexico, my daughter is from Viet Nam, my plumber is from Russia, my acupuncturist is from Korea.  We can all look to see how America continues to assimilate.  We would not have Google and other inventions in America if we were not able to assimilate.

America will continue to collaborate in world affairs as her greater destiny is to bring freedom, assimilation and collaboration so that there will eventually be the United States of the World.  We are all connected, we just forget it.  Here’s to America and her best days ahead!

Tagged: America's Transformation, Aquarian Age, July 4 1776, US and Numerology, US birthday
No Comments