Many times when I look at a person’s name and date of birth, I can see some obvious and natural persuasions for certain

careers and lifestyles for that  individual.   You might call them natural fits.  In the case of Mitt Romney, presidential office would be one of the least natural fits for his chart.   How can his chart help him?

Mitt Romney was born on March 12, 1947.  His birth name is Willard Mitt Romney.  His Life Path is the number nine (9) his Personality number is the five (5), his Soul number is one (1) and his Destiny number six (6).  He is born on a 12 (3) day and his only missing number is eight (8).  His energy package is water, air and fire–no earth.  Let’s look more deeply at this information.

First of all his Life Path (the sum total of his date of birth, reduced to a single digit) is the number 9.  This is the number of the humanitarian, artist, leader of world movements (Gandhi) and natural shrink.  Many of these Souls go into artistic professions or therapy work where they can help people with their emotional issues.  They also can be very prophetic and psychic.  In fact, Romney is extremely psychic.  He understands much more than he lets on and senses and feels things long before others do.  Emotionally he is a brooder.  For all his breezy demeanor, he doesn’t let go easily.  Number nine is a finishing number so in many ways Romney is completing a cycle of lives before he moves to another level of awareness.  He must give back in this life time and he must learn to let go.  He has the path of the wise person who, as he goes higher on his path, meets less and less people on the road.  In short, he will always feel alone even in a crowd of admirers.

Since his Astrological sign is a Pisces and his chart leans towards lots of water, he can have brilliant ideas and then forget what they were.  He knows things but he doesn’t how he knows them and when queried on them, he sometimes cannot be clear on the facts.  Pisces is ruled by the planet Neptune, the planet of illusions.   I have no doubt in my mind that his episode of putting the dog on the roof of the car for a family trip never really seemed any problem.  Nor does it sound strange to him to talk about his wife’s two Cadillac cars.  He literally knows he knows what’s going on but can’t really be the best spontaneous speaker.

Since the energy of Pisces is the energy related to the number nine, there is always some awareness of how individuals suffer.   I don’t believe any of his statements against abortion.  If he was elected–the big if–he would allow abortion as well as be in favor of  gay rights etc.  At this stage of his candidacy, he will say what he needs to say to get elected.   He would have to have really strong, smart people around him to assist in his presidency.  Deep down, he likes to go out and help the neighbors save their homes or help the drowning man.  This is your humanitarian–believe it or not.  He could be the Republican party’s worst nightmare as he cares deeply about people and feels he can help them.  Of course, the old expression, save me from the people with “good intentions”.

Romney’s personality (the total of his name’s consonants) is the number 5, the sales man.  He could sell you anything and 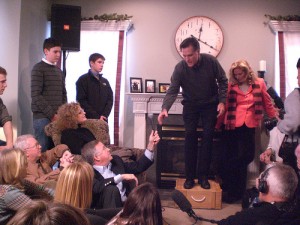 Down home standing on a make shift platform

it is very hard to say no to him.  The number 5 personality can be very restless (what is over the hill on the other side of the mountain?), be very curious and get easily bored.  They want change and I do believe he is no different.  Romney would push towards various changes in how our country operates.  The key to his performance is having excellent advisers to help him.  I do believe that is how he operated at Bain Capital.

Romney’s Soul number (from the vowels in his name) is a one(1).  Here we have the individual who is driven to be number one, be more  unique and do his own thing.  He likes to start new endeavors and that can be very helpful for his ideas and problem solving.

Our Cosmic Father of the Country

Romney’s Destiny is the number one (6)–the cosmic father.  Here we have the social worker, combined with the priest, combined with the parent who feels he knows what is best.  He truly believes he can fix America and wants to make sure everybody has a sweater, does their homework and gets a ride home.  This could play out in some pretty interesting scenarios–work programs, education programs, jobs creating programs, housing programs and mental health care.   He is strongly in favor of correcting social injustice so I would expect some changes to that area if he gets elected.  There is a bit of “I know what is good for you.”  Mother Theresa syndrome with a bit of the martyr complex.  He also has a strong appreciation of the arts so I would expect that would be a focus too.  Family is extremely important to him.  He loves family activities.  He truly does make for the perfect priest and I think he is very high up in the Mormon Church.

Another side of the Life Path number 9, his major learning lesson as well, is that of the actor, performer.  Romney has also been in past lives a very well-known artist/actor.  Something happened during that lifetime that either ruined his reputation or performances.  He has never forgotten it.  Deep down, he still loves the limelight and yet is frightened by its powers.  You can see him in his performances, liking it but never sure of himself.  He keeps changing his costumes to look more natural and down home but it just doesn’t fit.  He really needs to just keep to his comfortable business suit and tie and let him act normal.  Once he gets out of “character”, he can appear goofy and plastic and make nutty statements that he never intended.  Since he does have this acting ability, he has the natural ability to schmooze you.

Romney is born on a 12 day.  This gives him the energy of the number 3.  He truly wants to say what you want to hear. Sincerity of speech could be in question.   He is a great host and loves to be involved in creative endeavors–especially creative endeavors that have to do with words.  Writing poetry, prose, screen writing and bringing joy.  As I said, this chart is loaded with appreciation of art, beauty and the human condition.  If I never knew who he was, I would have suggested this individual open a therapy practice, become an actor and help the poor.  Along the way, plant a garden and give money away.

What Drives Him to the Presidency

What drives him to want to become President of the United States.  For that I look at what is missing in his blueprint.  Mitt is missing the number eight (8) in his name.  This is the number of power, leadership, material world operations and authority.  Most people who are missing this number in their name (no letter h, q or z) are quite ambitious and can be driven to make money and become very successful.  This is a karmic correction for Mitt.  That means that in some past life he either wasn’t interested in money, ambition etc. or  was ruled by it and was too authoritarian.  This lifetime is providing an opportunity to correct this imbalance in his chart.  He is to learn the correct use and value of money, time and energy and to become a quality leader, benevolent and ambitious.  This also means, if the number is missing, there is  the tendency to over do it or under do it.  No doubt placing himself in the area of leadership both of the state of Massachusetts and the past Olympics allowed him to learn the qualities of leadership that he needed to balance out his karma.  Bain Capital gave him the opportunity to deal with money and the value of same.  It was as  if he was being instructed  and trained in the correct use and not abuse of assets.

At this time of Mitt’s life he is in a number six (6) pinnacle.  This is the same number as his destiny.  He is in his element.

Timing is good for him.  Although he would seem like the most unusual candidate for Presidency of the United States, I think many people would be very surprised as to how moderate and progressive he really is.  He does care a great deal about humanity but he comes off as detached and uninterested.  This is the problem with his acting ability rather than his character.    The fact that he has the five (5) personality gives him a strong ability to make required changes.  In a way with Mitt having his own money and his psychic abilities, he doesn’t have to cow tow to the Republican party as much as other candidates would.  It could be a fascinating race.  I would not count him out.