With so many negative and sensational headlines and divisions in today’s society, we might be forgetting the simple signs of cooperation among the citizenry. I am not talking about Amber Alerts (although isn’t that a big sign of Americans helping each other?) and special calls to action for dramatic events of nature. I am talking about the everyday cooperation of people making a living and looking out for our neighbors.

Today’s story in the Los Angeles Times (August 14, 2013), tells the story of an area of Los Angeles that 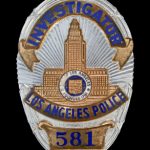 Protection doesn’t always have a badge!

has been chosen by the Los Angeles Police Department for traffic calming. Traffic calming is essentially rules deployed all across the city in an attempt to reduce cut-through traffic in residential areas. Among other things, the city has restricted turns, installed traffic islands and added stop signs and speed bumps. Sounds sensible on the top side. The bottom side (or unintended consequences) is that traffic has fallen in some areas but has moved the problem to other neighborhoods.

It seems one of these locations has lots of traffic rules. It happens to be a road that cars travel to get from the 10 freeway up to Century City. They have been doing it for years. The route cuts through a community of million dollar homes. It also has a large group of merchants whose stores now cannot be visited for certain hours each day. It seems since Jan 1 to April 12 of this year, a little more than 3 months, 200 traffic tickets have been given out to drivers making their normal left-hand turn. Tickets for such violations cost $238 each. Customers of the stores are irate and merchants are losing business. So what is the solution?

Local merchants have bound together and have created a system. They are on the lookout for waiting LAPD cars. When they see them, they run out on the sidewalk with warning signs “NO TURN! WILL GET TICKET!. The stores also hand out postcards bearing the phone numbers and email addresses of city officials, encouraging drivers to complain about the restrictive traffic rules. On top of that, one computer-repair store even offers a free hour of labor–calling it a “justice credit”–to any angry customer who arrives with a citation in hand. In the last 5 years they have given out 60 credits to customers.

The merchants are doing what they can to fight city hall and they, both drivers and merchants are depending upon each other. Basically, they are depending on the human factor. Although this situation will really never make headlines, it is a reminder of how we do help each other and how America, being the “land of the free and the home of the brave”, will never kowtow for very long to the rules and regulations that punish its citizenry for

its ability to make a legal living. Never underestimate the people! That goes for Wall Street behavior and the government behavior. We are a force that must be reckoned with. The years ahead will make this more apparent as the citizenry wakes up. Pay attention to 2015-2018.