Finally, we get out of the goofy primary phase of this election year and get on with the general election.  As I 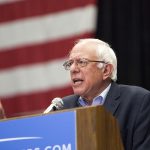 Raging against the machine

said before, and say it again, the election that will propel America forward will be in 2024 once Pluto leaves the sign of Capricorn.  In the meantime we have to continue breaking down the old structures and cleaning up the mess.  We are tired of doing it but the “revolution is 8 years long and we can’t avoid it”.  Look for promises by all politicians that will not and cannot be met.  Stay the course and build momentum on what needs correction.

First, let’s take a look at Bernie.  What will he do now that his has lost to Hillary?  He will speak with President Obama and gradually withdraw from the race.  He will show up at the convention and do his best to have his ideas and those of his followers incorporated into the Democratic platform.  My guess is he will not contest the race.  He still has to reside in the Senate and will want to be somewhat relevant.  His job as the number 5 life path was always about stimulating change.  5’s are catalysts.  They initiate change.  They themselves remain the same but all around them changes.  He stimulated the millennials, all 86,000,000 of them, and helped them to become involved in the political process.

Here in California, 27% of the Democratic vote comes from one area, Los Angeles county.  This is a whopper.  In this county though, only 30% of the eligible voters voted.  It’s better than the last presidential primary where only 22% of the eligible voters voted but still nothing to cheer about.  One of the reasons Bernie did not win, was the fact that millennials do not get out to vote as much as they come out to cheer and support.

Another reason Bernie did not win is his birth chart.  It just doesn’t line up that well with America’s.  On top of that, he is missing a very large group of important numbers, the numbers 3, 6, 7 and 8.  On top of that, his emotional makeup is impatient and a bit hot-headed.  He acts many times before thinking things through.  He has great big ideas but not reasonable execution.  He needs much more of the military general style of a strategy and tactics to support a campaign.  Throwing universal wage, single-payer health care, free education etc. against the wall without taking into account the intricate playing field he would have to maneuver and the existing special interests of other groups is naive.  His moon in Aries fed by a Mars in Aries helps him to sound fiery and war-like but the rest of his chart takes the wind out of his sails.

The missing number three results in Bernie being highly self-critical.  He always finds something wrong with his own performance.  He needs to lighten up on himself as he has this self-critical factor that needs to be contained and controlled.  He needs to be more joyful, enjoy life and share this joy with others.  He is much too serious and it showed all through the campaign.  He also is not heard well.  Missing a 3 always has a component of not being heard.  Not good for a candidate.

The missing number 6 has to do with commitment and responsibility to others.  The tendency is to form relationships but stay very heavily guarded.  This can make the bond between him and others very  superficial.  He is learning how to have sincere relationships.  I am sure this has affected his relationships in Congress where he is not known as being supported or liked.

The missing number 7 displays a need to deepen his knowledge and be more discerning.  He must learn to be his own critic without self-condemnation.  He must learn to not take things at face value.  He needs to look deeply at a subject matter and understand all the nuisances of a situation.

The missing number 8 is about developing your resources wisely.  Missing an 8 people are highly independent and do not like to be told what to do.  They can see advice as criticism.  A know-it-all tendency develops.  There is always a problem with authority figures for those missing the number 8.  There is also a general stubbornness born of the missing 8.  The missing 8 karmic lessons forces him to learn his limits and the limits of his resources.

He was never going to be the American president but he is the catalyst of change and was able to ignite a spark in million of voters and to point out the glaring problems inside America.  American citizens resonate with income inequality, corruption and rigged systems.  We will be working on this through summer of 2023.  It is imperative that we become involved.

9 responses to “Bernie, Hillary and Don–Welcome to the Big Top–Part 1”