Controlling the Uncontrollable–Wildfires and Life

Last week I was up on the Central Coast of California enjoying a few days of rest.  It is just about my most favorite area of 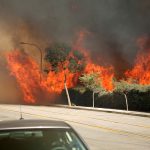 California.  It has a wonderful pace of life and mile after mile of coastal beauty.  I like to go there and just hide away in one of the lovely beach towns.  My favorite area is Morrow Bay and Los Osos.  You can sit on the dock, have breakfast and listen to the sea otters.  About as peaceful as it gets.  Plus it has a raw beauty about it.  The beaches have seaweed, shells and horses.  A few people ride their horses on the beach.  It looks like something straight out of an advertisement.  In fact, you have seen Morro Bay’s enormous 14 million year rock in many of your car commercials.

Two things happened on this trip.  Both of them weren’t earth shattering but both would give you pause to think of a bigger picture than yourself and your mundane activities.  Both of them have to do with control or the illusion of control.  It is an illusion.  We control little here but we act as if we are in control of it all.  There is nothing like a big whack on the side of the head to bring you out of your illusion.

I met a woman named Barbara on this trip.  She was sitting by herself at a nearby table having coffee.  We struck up a conversation.  She has lived in Morro Bay for three years and loves it.  She lives by herself and has coffee or breakfast just about every day at the Blue Sky Restaurant on Morro Bay’s dock.  They call it the Embarcadero.  I asked her what prompted her to move to Morro Bay and then she told me the story.  It seems three years ago Barbara and her husband were both retiring school teachers in Fresno, CA.  Within a short period of 6 weeks her life would be changed forever.  Her husband had not felt well, went to the doctor and within two weeks died of cancer.  Her daughter, who worked in Compton as a school teacher, was beaten to death by a gang.  Her brother also died within this 6 week period.  Her husband, before he died, told her to get out of Fresno and go to Morro Bay where they had visited numerous times and loved it.  She did.

I don’t know about you, but I was stunned just hearing this.  The randomness of these events.  I am sure Barbara would have stayed in Fresno for years.  They owned a home, had numerous friends and were very involved.  The funny thing about it all is that when this happened and she decided to move very quickly, almost all her friends tried to talk her out of it and some became quite angry with her for not doing what they suggested.  She said she left and has not looked back.  The only family she has left is her son who lives in Los Angeles.  She says he is doing well.  She has made a new life for herself and the wait staff at Blue Sky is her new family.  In fact, unbeknownst to her, one of the servers said that the entire staff has started a Christmas collection for her.  They are buying her Christmas presents as a holiday surprise.  Barbara has given up controlling her life and lives in the unusual space of loss and love.  She does volunteer work which includes clearing sand away from walkways so people with disabilities can move safely.  Now tell me, how would you survive this given set of circumstances?  This was a complete surrender and trust to the life force.

The second experience that happened on this trip was the drive back to Los Angeles.  I am sure you know all about the fires that are still raging in Southern California.  These fires lick the 101 freeway and I knew that was my route back.  I followed the reports and they said the 101 was open so off I drove.  It was wide open and beautiful for about an hour and a half and then it was just blocked.  You were forced to drive off the road into the great unknown.  The beach and sand were on your right so you had no choice but to go left into the canyons and find your way out.

Now these canyons don’t have signs, no road numbers, no houses, no nothing.  Just deep country roads and some vineyards.  You were literally following your nose.  The only sign I did see what “poor pavement ahead”, Caution.  This was a complete trust road trip.  No GPS was going to help because I didn’t know what my destination would be.  Was I going to Los Angeles, Santa Barbara where?  The sun was on my right side so I knew I could follow that and I just wanted to keep going south or what I felt was south.  This was a complete letting go and just trust you will end up safely.  You never want to get trapped in a canyon where there might be a spreading fire.  I just kept on going and eventually landed on a paved road that had a number.  This led me to a sign that said Santa Barbara.  I took it and I was right.  The rest of the trip was uneventful except for the smoke and still burning fires on the hillsides of the 101.  I did buy face masks in Morrow Bay knowing I would go through smoke territory.

In living our lives here on earth, remember that we can plan, we can direct, we can worry, we can expect but we cannot control.  Our lives will have the element of randomness.  We should teach ourselves to realize this is always part of our journey.  Sometimes our entire house burns down around us and yet we are left standing.  What would you do?

11 responses to “Controlling the Uncontrollable–Wildfires and Life”