Hillary Clinton–Here is her blueprint

Hillary Diane Rodham, known to you as Hillary Clinton,  has a number 3 Life Path (the sum total of her date of 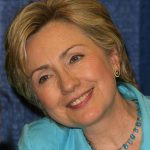 birth reduced to a single digit).  She was born October 26, 1947.  This is the path of the person who is to be a communicator, creative type.  They can go into creative professions, including art, acting, writing etc.  You find many of them in Hollywood where we have screenwriters, actors, musicians and artists.  They have a gift of the word.

Due to the last letter in her name the “y”, Hillary has a dual personality and soul number, the vowels and consonants in her name.  One of her personalities is extremely clever, funny, loves parties, and is charming, (the number 3).  This is where you see the writer, the gifted debater, the actress.  This is where she gets this outrageous laugh.  She can be lots of fun.

The other personality is very independent (the number 1), bold, courageous and not afraid to speak up or out.  These are trailblazer types of people and will initiate rather than wait to be lead.

Her destiny, (the sum total of her entire name) is the number 6.  This number 6 shows up in most of the candidates.  Some 6 people are self-evident, such as Rubio, Cruz, and Chris Christie (all who have 6 life paths) and Carly Fiorina born on a number 6 day.  Time and time again we keep seeing the number 6 as the most prominent number with all of these candidates.  Donald Trump and Bernie Sanders are the exception.

The number 6 people always have a “cause”.  They feel they know what is best for you.  Each one thinks that if only you do what they suggest, it will work for your betterment.  George Bush was also a 6 Life Path, again, I know what is best.  We need to be spared from 6 life path individuals.  6 destinies are different.  This is more subtle and is the case with Hillary Clinton.  She is striving to help but doesn’t come out with that martyrdom of many  number 6 Life Path people.  Six Life Path individuals become very righteous and self-righteous–witness, Cruz, Rubio, Bush, Christie, Fiornia.

When you hear Hillary talk, she is gifted with her words but lacks the number 2 (her only missing number–no b, k or t in her name), she is learning the art of persuasion and tact and must learn patience.  This was her karmic lesson.  Patience, diplomacy, tact, persuasion.  When it is missing, it is challenging to create it in politics.  She needs to lighten up and have fun doing this campaign.

Her chart is loaded with the sign of Scorpio.  Good heavens.  She can be extremely sarcastic and I have no doubt in mind that she could rip apart anything she decided to take on.  You would certainly want her on your side in battle.  The funny thing is with her moon (ruling the emotions) in sensitive Pisces, she gets hurt more than you would know.  She is extremely psychic and hides a lot of what she knows.  People will call her secretive because of this.  She has been accused of being overly private.  Certainly with 3 number 4’s in her name (the letters d and m) she brings tremendous hard work habits into this lifetime.  She is also bringing the gift of the writer.  When she writes, she wins.

Her first name Hillary is an extremely powerful name with the big H leading (number 8) and the brains behind it (the letter “y”).  Men with names that begin with the letter H are usually very successful.  Harry, Howard, Henry, even Hitler.  The letter “H” steps out in the world with power.  None of the candidates except Hillary starts out with the letter “H”. The transits in her chart right now are not that favorable but they improve as it gets closer to election time.

4 responses to “Hillary Clinton–Here is her blueprint”