The Bonfire of the Vanities–We keep repeating our lessons

John  Maudlin, a great financial writer and consultant, recently wrote a piece about the “Bonfire of the Absurdities”.  He was 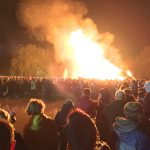 Modern Day Bonfire of the Vanities

using it as a financial metaphor.   The actual book he was referring to is Thomas Wolfe’s “Bonfire of the Vanities.”  It was written several years ago about the financial markets.  I think it was made into a movie.  Nevertheless, that’s not the point of this post but it is a reference marker.

Back in 1490 in Florence there was a ruling family called the Medici family.  These were all powerful people and they brought in a Dominican friar Girolamo Savonarola to serve them.  In a few years, however, Girolamo was more or less ruling the city.  Within 5 years, in 1495, during the pre-Lenten carnival, Girolamo began hosting a “bonfire of the vanities”.  During this time people would burn objects that inspired the deadly sin of vanity.  These included mirrors, cosmetics, musical instruments etc.  This was Florence so they also destroyed tons of artworks, tapestries, books, furniture and other priceless treasures.  The question is, did this make them any less vain?

Today, Maudlin goes on to tell us that in similar manner we routinely “burn” hard-won lessons (or at least remove them from our thoughts) because “someone with an ulterior motive convinces us they’re useless or harmful.”  (Can you think of a few of those in power who do this today?)  This is seldom true but we usually find out too late and then, of course, we have to learn the lesson all over again.

Maudlin suggest you think about this–especially before you vote again.  How often do our central bankers, regulators, corporate leaders, lawyers and our politicians make the same mistakes over and over again?  If we would stop burning our memories and invest in historical knowledge, we might make better progress.  I am afraid we will have our bonfires again.  We are being told now how good a new tax bill will be but we know there are absurdities written all through it.  Anything rushed through and lopsided smells of fear and rush is always an example of fear.

Unbeknownst to those in power, the heavens will be releasing powerful transits all of next year with sudden surprises coming for the next 7 years.  The rule of “unintended consequences” will play out as they did in Florence hundreds of years ago.  Today, who are those who have ulterior motives and are trying to convince us that regulations and laws are useless or harmful.  Pay attention, read underneath the headlines and don’t drink the Kool-aid.

Tagged: Power behind the throne, Unintended consequences, We are making the same mistakes
4 Comments